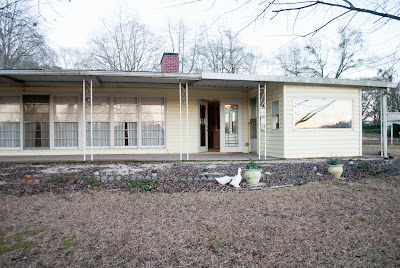 My husband and I had been looking for a place at the lake for about three years.  We were not very serious, just checking the Internet every once and awhile, and occasionally we would drive to the lake to look at a place. 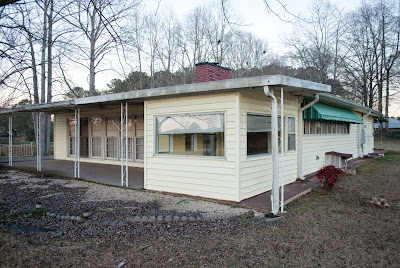 We decided that if we did find a place, our number one goal would be to pay for it as we go.  Because we wanted this to be an investment in our future, we knew that it would not be wise to go into debt. When searching, we knew how much money we had to spend, and we wanted to pay for improvements as we went.  So pretty much the homes in our price range were described as “fixer-upper, needs work, handyman special,” and especially, “seller very motivated and bring all offers.”   When I found this home on the Internet, it did not have any pictures of the inside of the house. That told me that this may be something we could afford.  I could tell the lot was beautiful and level.

We assumed that there were no pictures of the interior for a reason.  It was bad, but it wasn’t that bad.  The rooms were large, it had lots of windows, a fireplace, and it was in an amazing neighborhood.  I love to see the before and after, so I knew we could make this place our summer home.  The house was an old fish camp that was built in the fifties, and it needed all new electrical, plumbing, heating, and air.  The previous owners had lived there for thirty years and had done all of the additions themselves.  The real estate agent gave us the inspection report that a potential buyer had done, but they felt it was too much work to do and walked away. 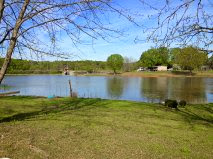 The smartest thing that we did was to get prices that included repairing everything that could be wrong. We also got a price for every home improvement that we wished to be done. That way we would know how much we should pay for the house plus with the improvements, we would not be paying more than we could purchase a “move-in ready” home for.

Next, we prayed. We prayed together as a family.  We prayed that if it was not God’s will, he would shut this down.  Our next move was to call the real estate agent and closed on the house two weeks later.

The house did have much more damage than we originally thought, everything from termites to rotting wood. We both say that we have never worked so hard physically, or have ever been so sore and dirty as we have been while working on this house.  There was a time where I looked at my husband, both of us exhausted and filthy, and said: “We just bought a foundation, a lot, and a whole lotta trash!”  It took one year to get the house to where we could move our furniture in.  We mostly worked on Saturdays and Sundays after church.  We also took most of the football season off because there was no television there and us southerners have our priorities!

Our fear was that this house really would end up costing us more than a “ready to move in” home would.  Because of that, we decided to do all the work ourselves.  We told ourselves to remember that this is a summer home, and it does not have to look like something out of a magazine.  This was a place for our family to have fun and make wonderful memories.  We did hire someone to do the electrical, sheetrock, and place Hardie board on the house. I told my husband, “Let’s do most of the work ourselves.  What if we are the type of people that can do this, but we will never know if we don’t try.”  We still laugh about that remark.

I want to add that almost everything in the house is purchased second hand.  Most of the items came from Craigslist, thrift stores, or we made it ourselves.  The only thing I can think of that is new is the TV, rock sink, pillows, letters on the wall, and we had the mattresses. Because of doing all the work ourselves and finding almost everything at the thrift store including brand new kitchen sink, new faucets, even the new kitchen beadboard backsplash, we came way under budget.  We even found the brand new high end, easy close kitchen cabinets from Craigslist. We also saved a ton of money by staining our concrete floors.  The total cost for staining the floors throughout the entire house was under $600.

Update: Now that we have been in the house a couple of years, we have purchased some new decor pieces. 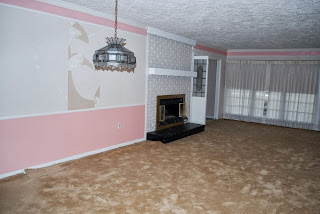 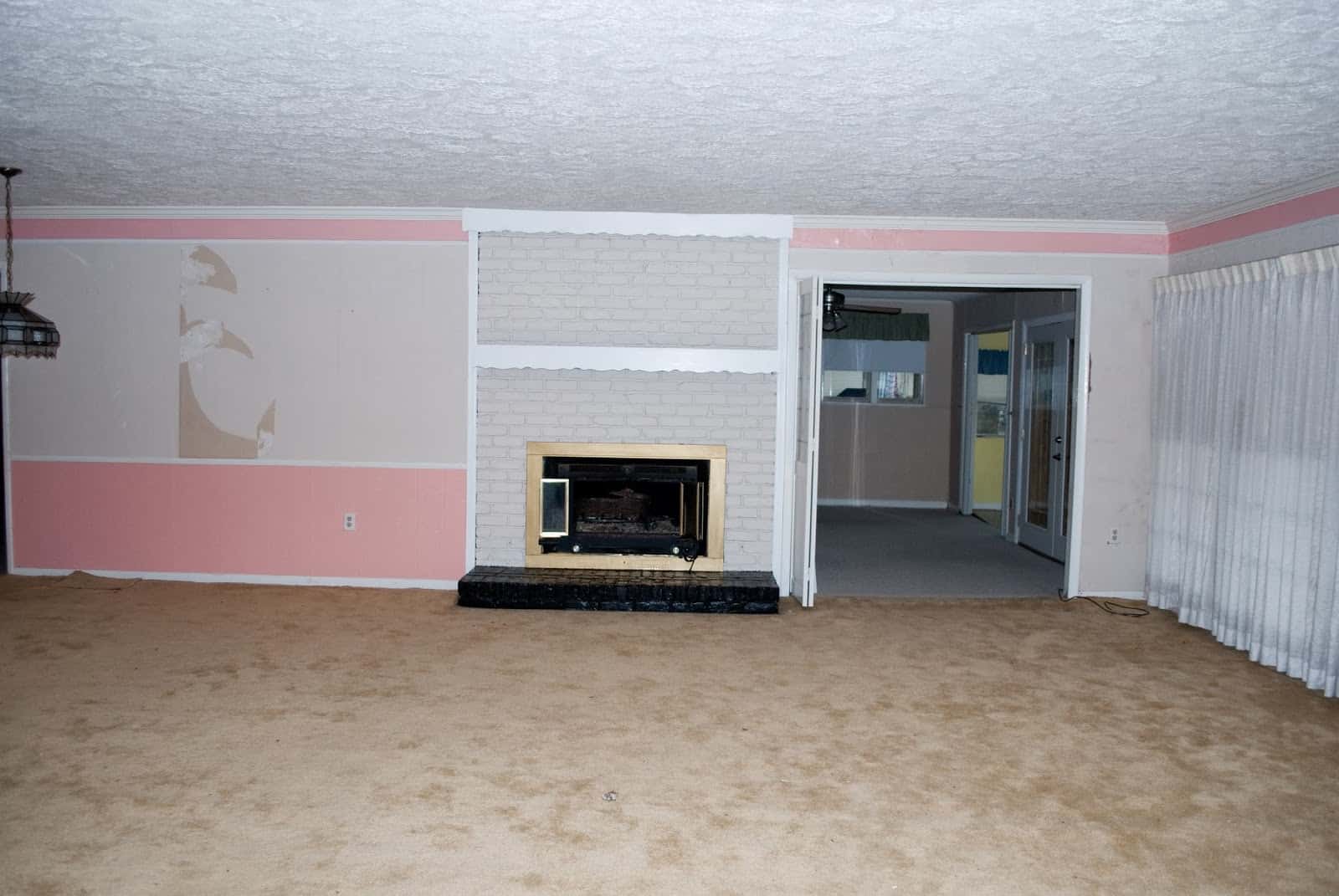 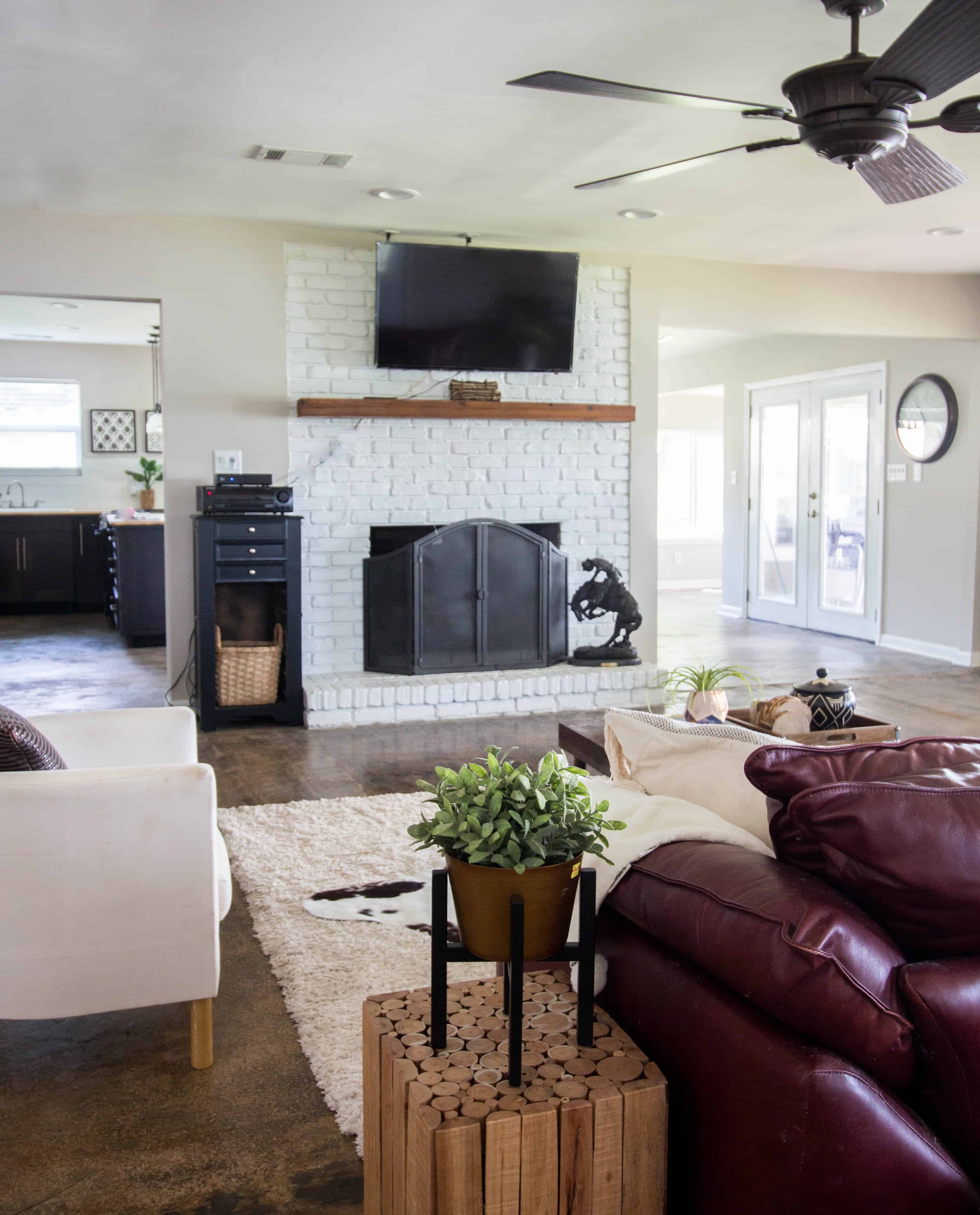 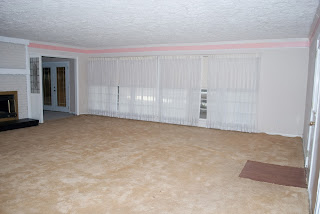 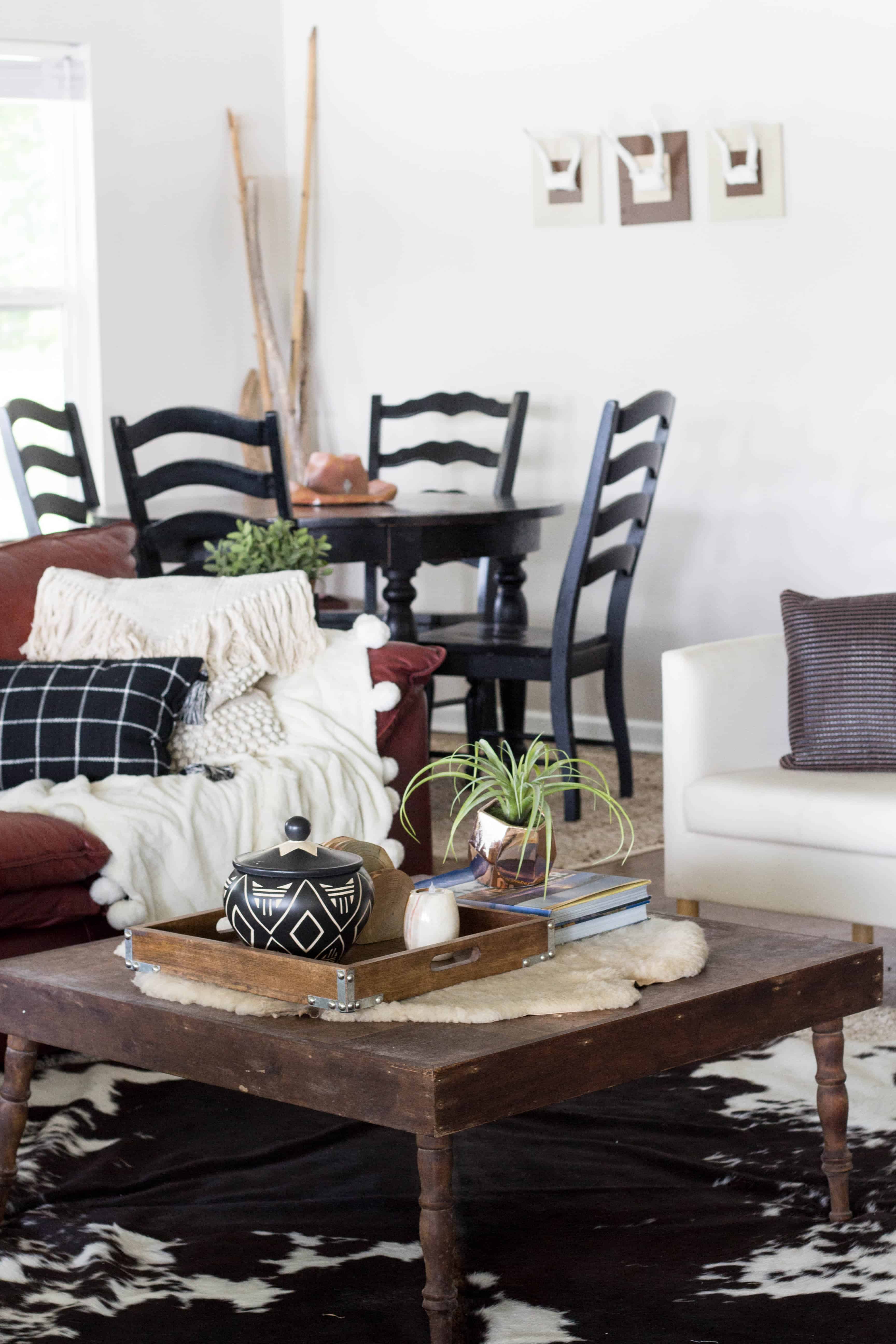 I needed a coffee table and I could not find one that I liked so I asked my mother if she had a coffee table that she wasn’t using. She told me that she had an old table that someone made for her in the 1950’s and it is perfect. I love using something that is just being stored away. My mom always comes through! We also added a thrifted table in the corner to play games and work puzzles on.

Because of purchasing second-hand items, including cabinets and appliances, the total of the kitchen renovation was under $1900. 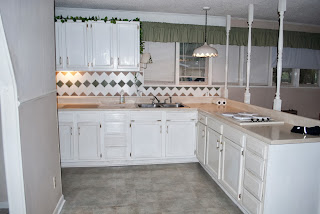 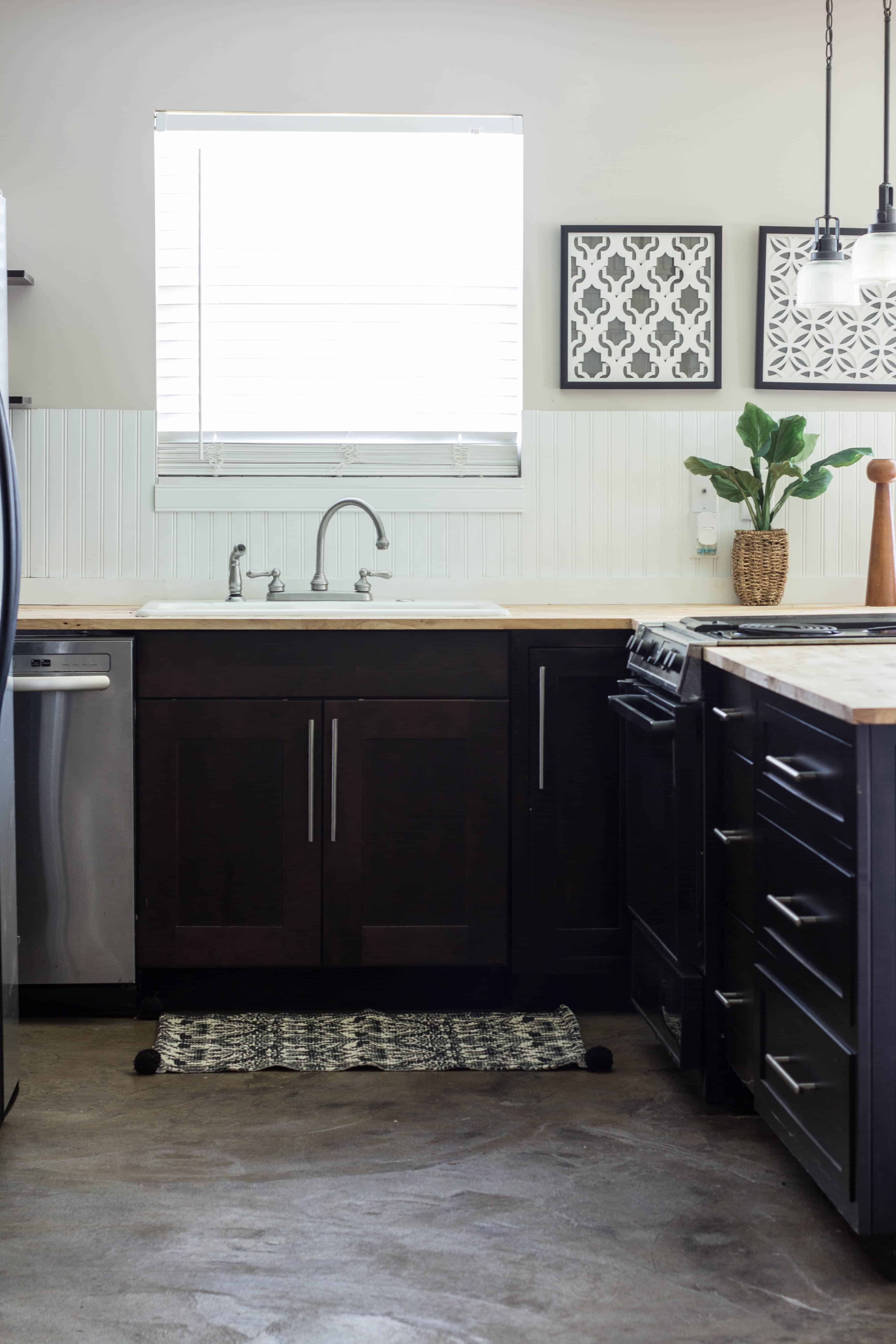 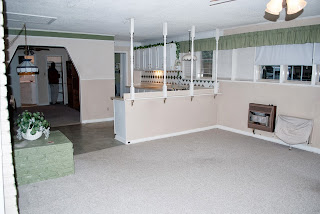 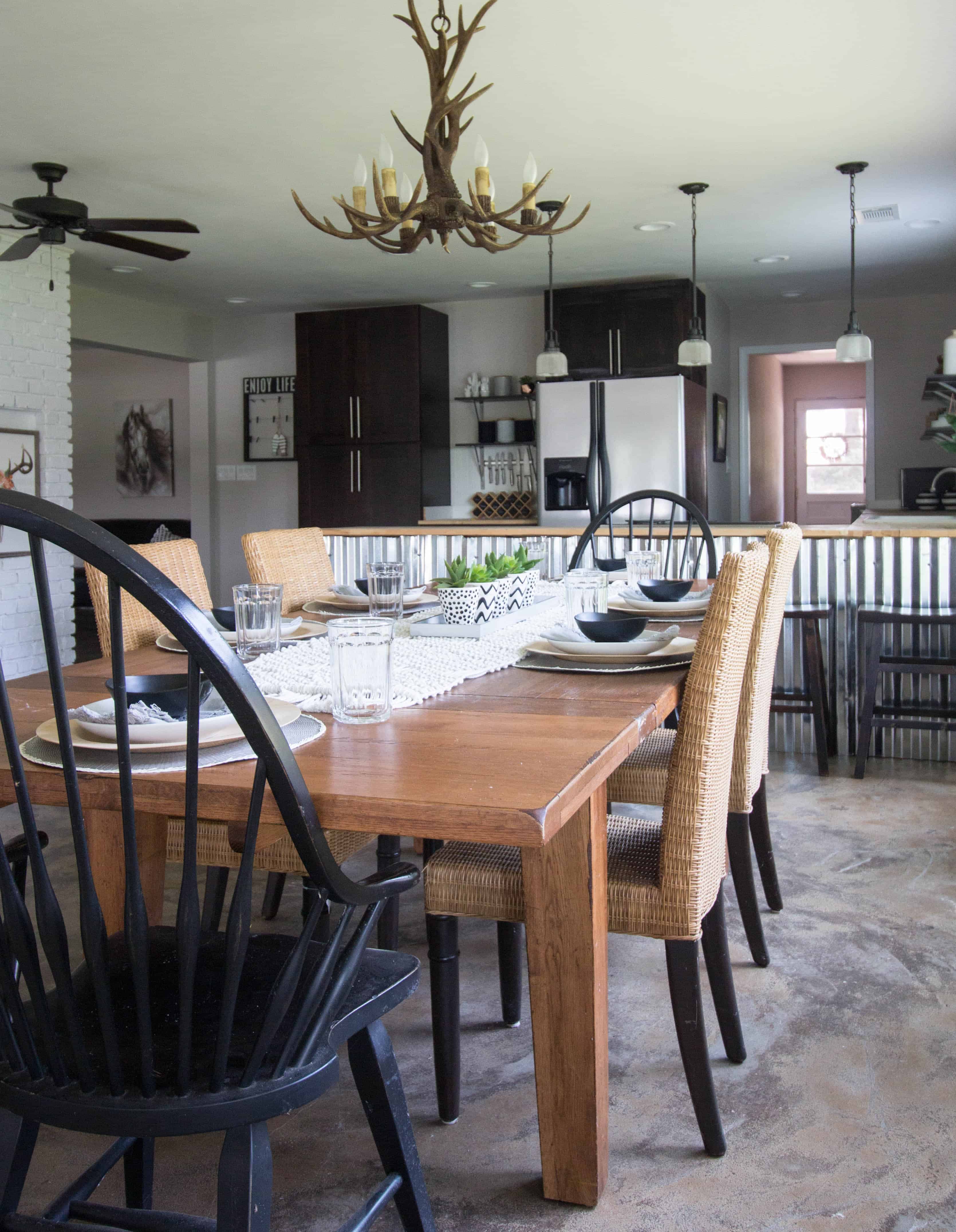 I have had so many requests about the antler chandelier.

Kitchen Bar and Eating After 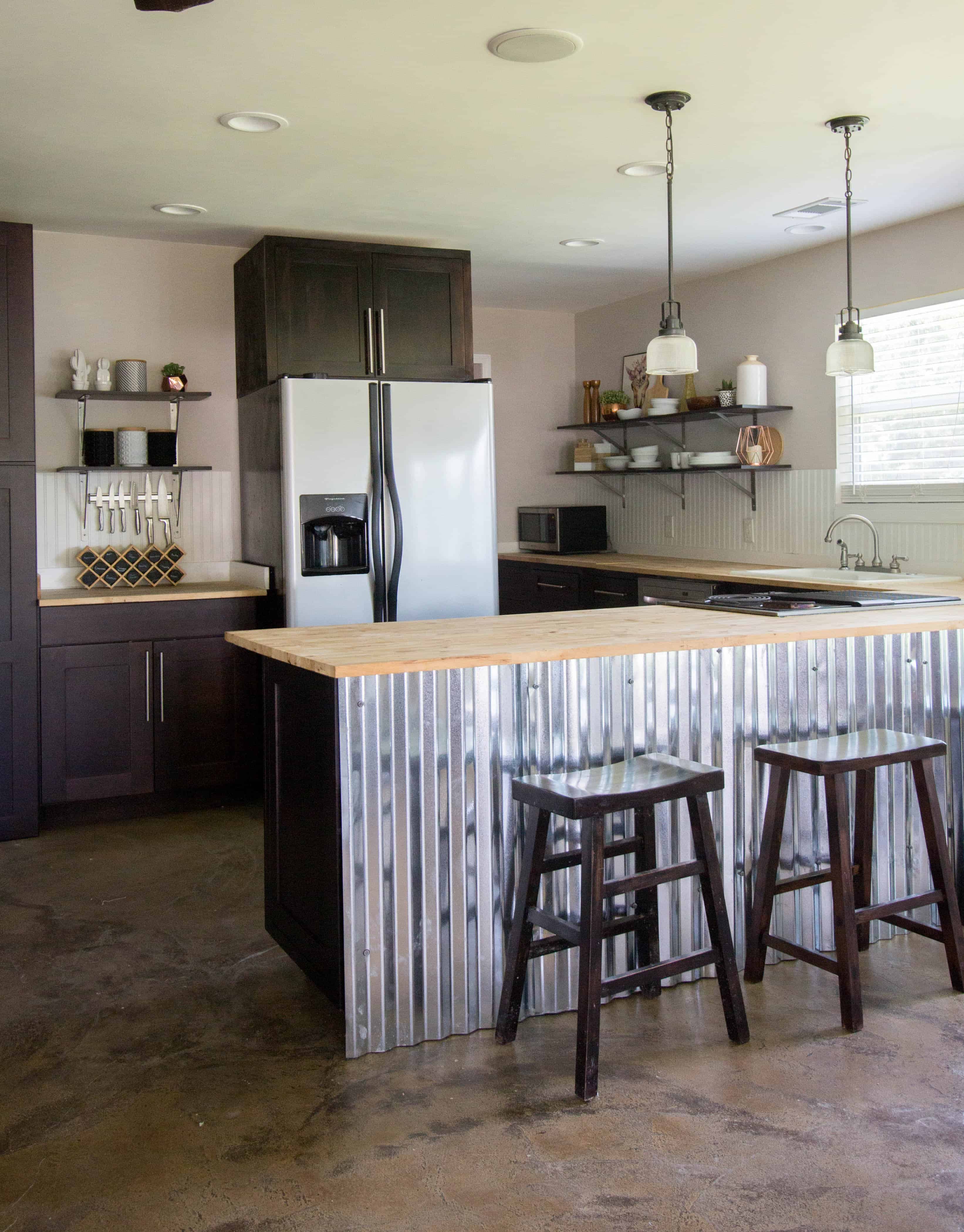 How We Stained Our Concrete Floors 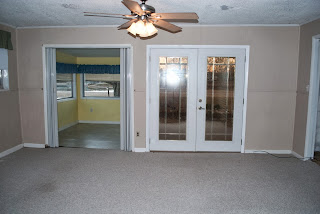 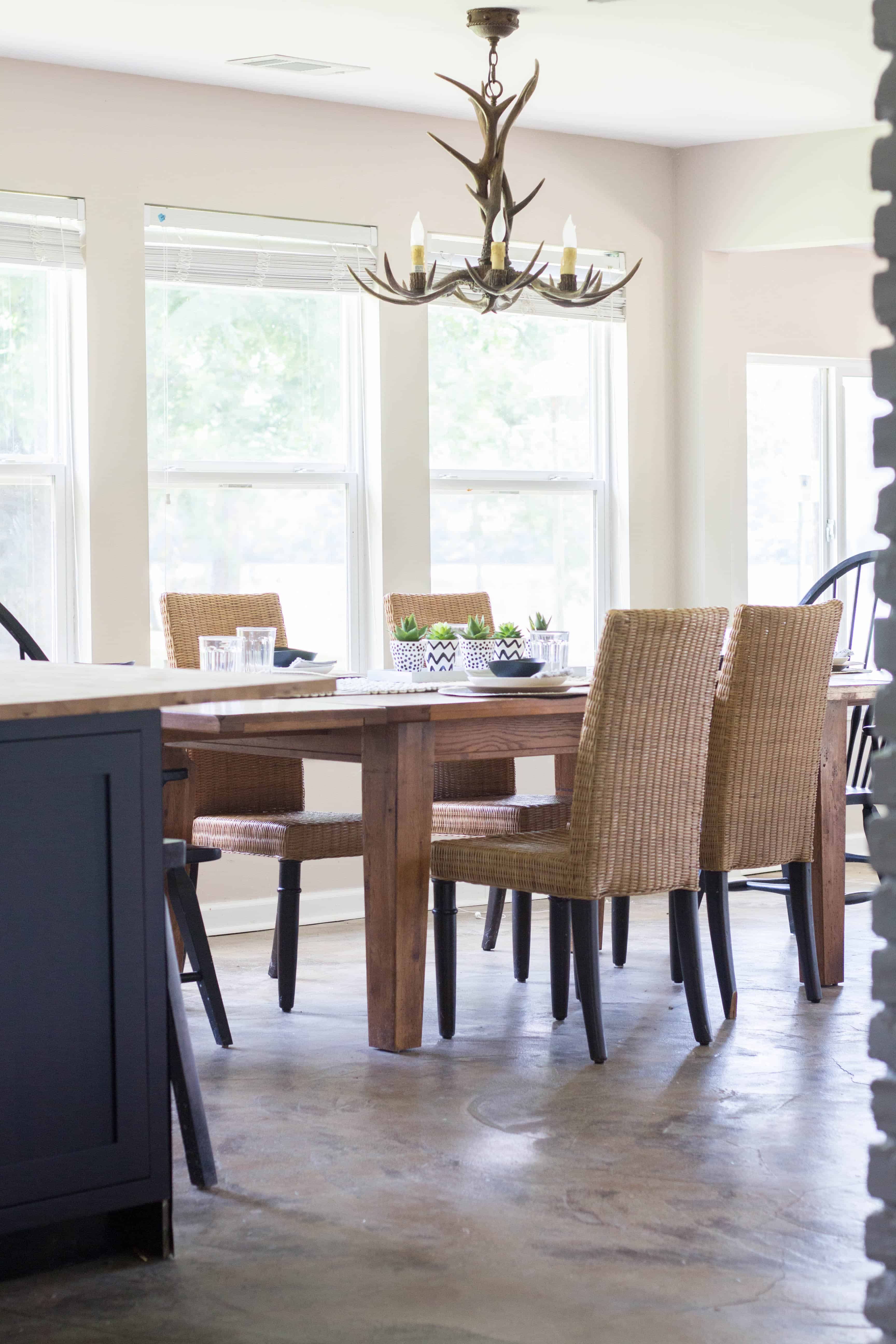 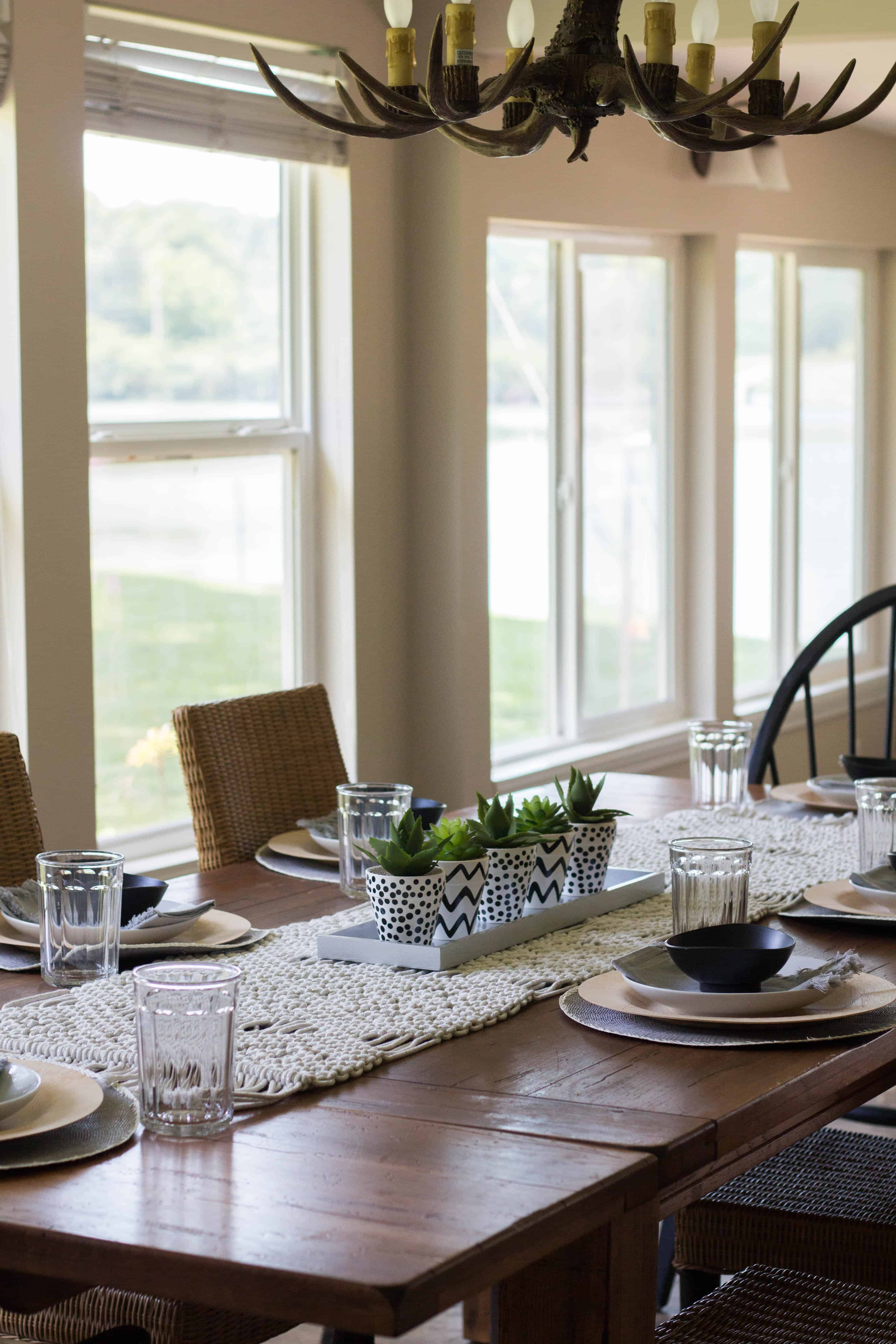 My favorite time of day is walking into the kitchen early in the morning and seeing the beautiful view of the lake through all of the windows. 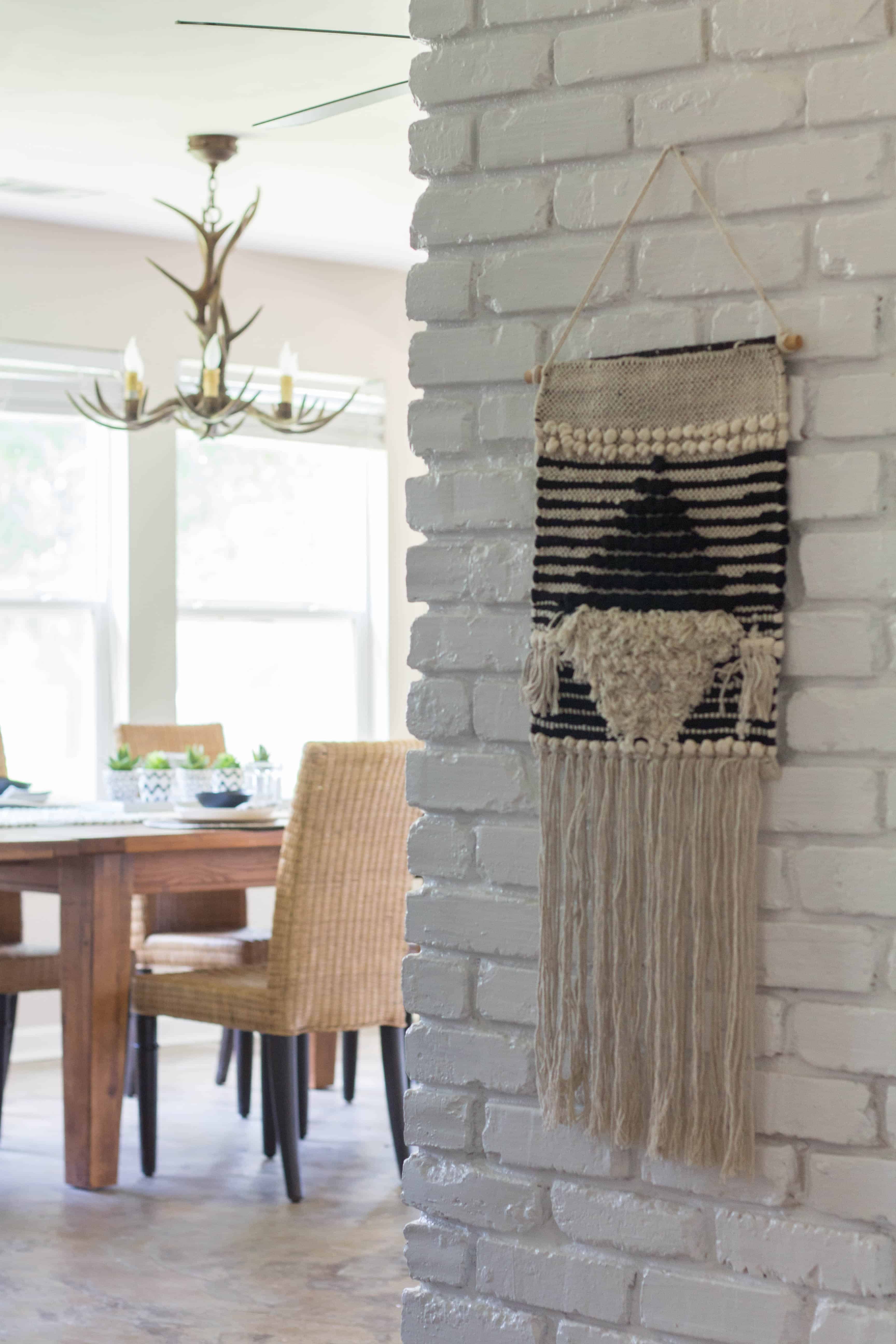 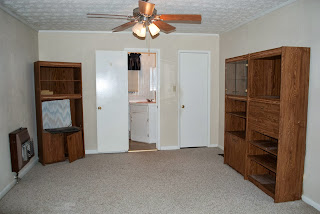 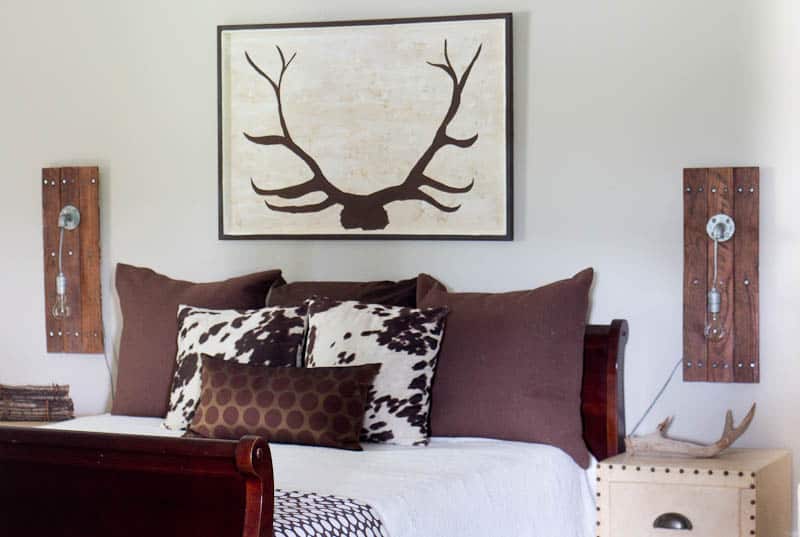 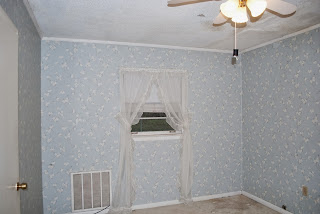 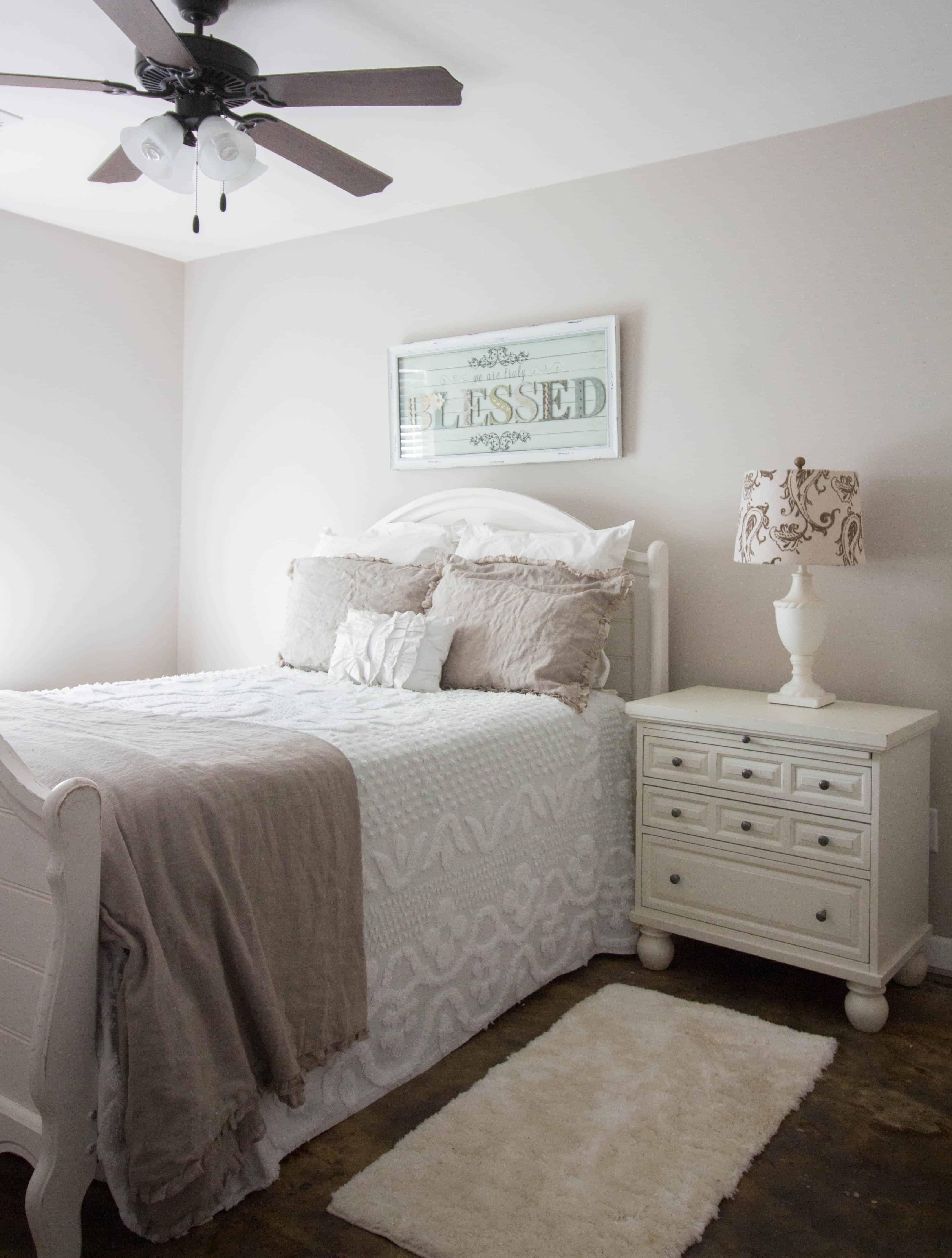 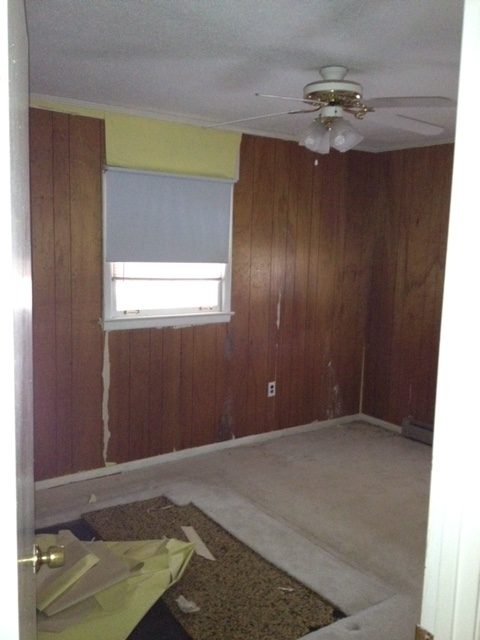 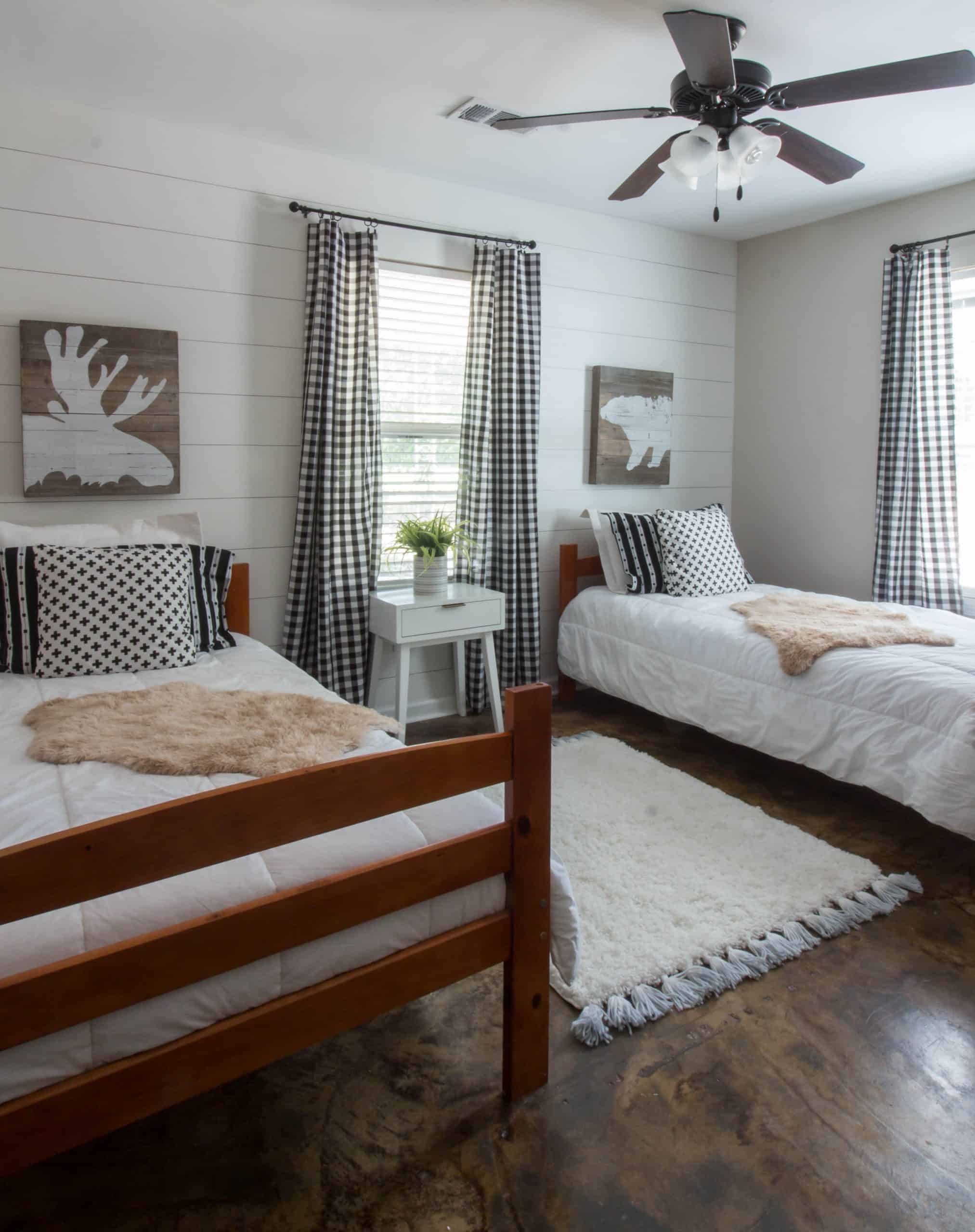 The bedroom was madeover for the $100 Room Makeover Challenge last September. 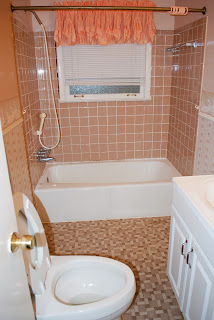 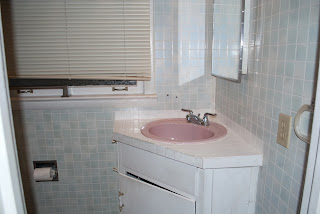 This vanity is a repainted thrifted vanity and I did a sponsored post with Cedar Safe to add a cedar bath and cedar master closet.
If you enjoyed viewing our remodel, you can see all the posts in our Lake House Project Gallery!
I did not blog while we were renovating this house for several reasons.  I was afraid that the house may have so much damage that it would have to be torn down.  I was afraid that it would cost much more than we anticipated, and we would have to sell it. Since we were going to do most of the work ourselves, and we do not have a clue to what we are doing, I was afraid that it may take forever for us to complete. It really was worth all the hard work.  My teenage son learned how to demo a house and build it back. He worked at least one day during every part of renovation so that he would learn how to renovate and that if you work hard, you can accomplish your dreams!